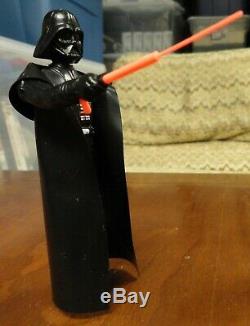 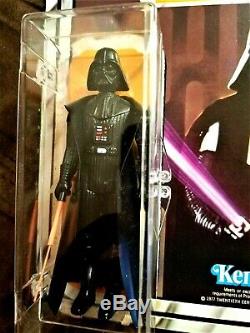 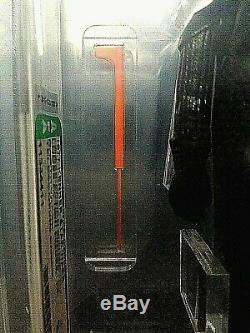 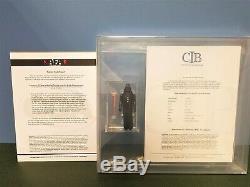 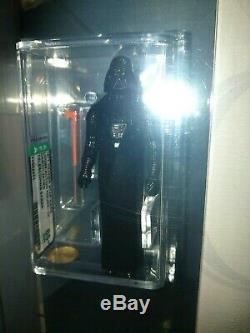 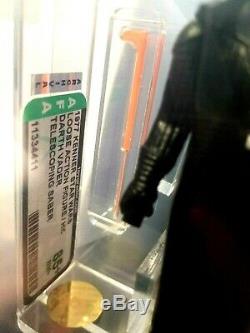 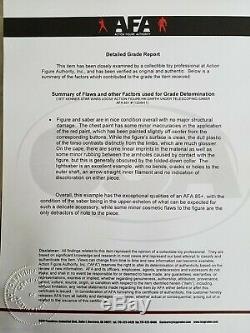 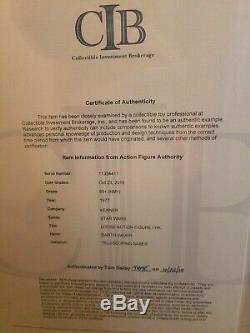 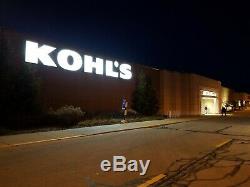 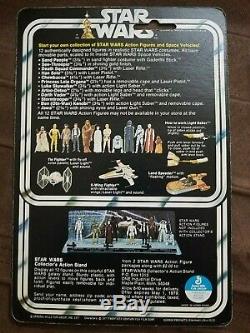 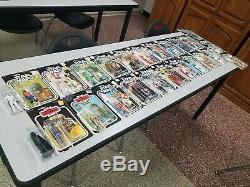 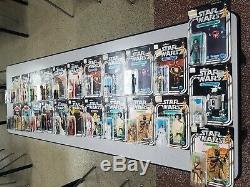 This is perhaps the most exquisite Double-Telescoping Darth Vader Lightsaber in the world. To quote the Detailed Grade Report: The lighsaber is an excellent example, with no bends, cracks or holes to the outer shaft, an arrow-straight inner filament and no indication of discoloration on either piece.... The condition of the saber being in the upper-echelon of what can be expected from such a delicate accessory.

The grade given to the combined figure and dt lightsaber is an 85+ Near Mint. The report states that some minor cosmetic flaws to the figure are the only detractors of note to the piece.

This extremely intricate examination goes on to mention that the figure has limbs that are glossier than the torso, some of the red paint on the chest is slightly off-center and that there are some minor imprints in the cape that are obscured by the folded-down collar. Nevertheless, this Darth Vader figure is in excellent condition. Is there a lightsaber in this universe that surpasses this one? I took great care it of since my mom brought it home from Kohl's Department Store when I was in 5th grade. I wasn't thinking about value.

I was just proud of it. 33 years later and just before the ninth film in the triple trilogy is about to release, I finally have it graded.

I flew down to Atlanta to deliver it to AFA myself. This includes the original 12. Along with taking great care of the figures and all of their weapons and accessories, I also kept the cardboard backs of all but two figures, a second Darth Vader and a second Stormtrooper. Maybe those two backs are still somewhere stuck between a couple of books or something, but they haven't been with the rest of the cardboard backs for at least two decades. None of the figures are in their original bubbles.

The main flaws with the figures is the broken tip of Ben Kenobi's lightsaber and perhaps the lighter C-3PO having looser joints than the rest of the figures. Otherwise, they are in excellent condition and all original weapons are with them in their individual plastic cases, which I obtained sometime in the early 1990's. All were within Waukesha County, WI and 10 miles from my home. PICTURES include those of Vader and his saber in the new acrylic case along with the authenticity documentation and the Detailed Grading Report. I have not yet taken off the plastic wrap from the case so pictures will not be as clear as they will be when the wrap is taken off. THE MAIN PHOTO WAS TAKEN YEARS AGO, BEFORE I KNEW THE VALUE OF THE FIGURE. I also have included the pictures of all the other figures with their original card backs. This includes the orginal 12 figures on their original 12 cardbacks.

I remember not wanting to order the Boba Fett because he wasn't in A New Hope and I thnk I would have had to cut up the card backs. The Darth Vader cardback is the one from the double-telescoping lightsaber Vader.

As you can see, I was very careful with that as well. The second Vader will now need to replace the DT Vader on that card back since the DT saber Vader is encased in its new AFA case. THIS LISTING IS ONLY FOR THE DT VADER AND LIGHTSABER IN THE AFA ACRYLIC CASE. THE OTHER FIGURES AND CARDBACKS, INCLUDING THE DT LIGHTSABER DARTH VADER CARD BACK, ARE AVAILABLE IN ANOTHER LISTING.

I will include the original Detailed Report with the figure and case. I do have many more pictures, including close-ups of all figures and card backs. Message me if you would like to see more pictures or receive any other information. Thanks for your interest and passion for this cultural phenomenon!

The item "World's Best Lightsaber Vintage Star Wars Figure 2x Telescoping DT Darth Vader" is in sale since Thursday, November 28, 2019. This item is in the category "Toys & Hobbies\Action Figures\TV, Movie & Video Games". The seller is "mollynyount" and is located in Pewaukee, Wisconsin.